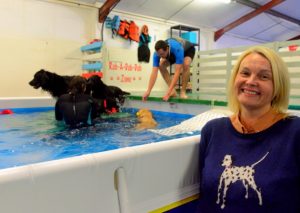 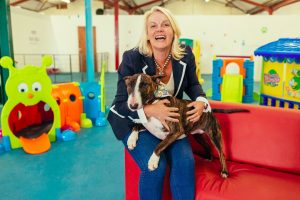 Founder and Director of Suffolk Canine Creche and the Canine Creche Group, Candy has lived, owned and shown dogs all her life, starting with Junior Handling when a youngster with American Cockers and Bassetts and lived with her parents Shar Pei’s and St.Bernards, falling in love with her own breed – Dalmatians.

Living at home with her husband Nathan and Five Dalmatians and regularly showing them, they are all qualified for Crufts, weekends are spent travelling around the countryside at various different shows. Sometimes invited to judge at Dog Shows, a past time she greatly enjoys. Occasional breeder, though loving nothing more than spending plenty of time with her very pampered Dalmatians.

The animal part of her life was always in the background, whilst she developed and forged ahead with a high profile HR career. Finally, she resigned from her position in August 2011 and spent the last few months of the year designing the facility, securing the premises, obtaining planning permission and adhering to various legislations.

“I had seen the type of facilities they have in America and I knew that a Canine Creche could offer so much more than just having dogs running around outside all day, lets face it, they could do that at home!” says Candy, “So, at a time when most people think I must be Barking Mad due to leaving a secure job during a recession, I launched a new concept business, with the emphasis being care for the dog, treating the dogs the way I want my own to be treated, some are more active than others and some of my oldies want nothing more than to chill out all day, though my youngsters need constant entertaining, they can party all day! I am hugely passionate about the Creche and feel that this change to the animal industry has been a long time coming”
We now have an Award Winning business model, and during 2016 we launched our new franchise program which as taken after faster than you can bark about it! We are opening new sites constantly throughout 2017 and are keen to talk to people who want to make a life changing move.

We are launching and researching new services constantly, ensuring that we are the trail blazers for this industry.
Then have a drop which says Group Staff 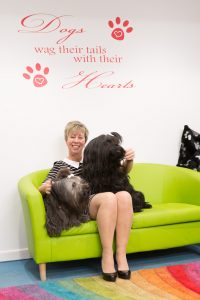 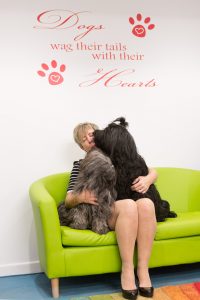 Valerie has been with the Group for many years as she initially headed up the Front Of House function at the ‘mother ship’ in Martlesham. She was integral to developing many of the services and processes that operate today and was promoted to Franchise Support Manager in 2017.

Valerie is first line support for all our franchisee’s for their day to day queries, she heads up their Grand Openings and events such as Puppy Parties and ensures their marketing is running effectively.

Valerie sources new properties and liaises with commercial agents, she researches the industry, and monitors new services that are launched in the ‘mother ship’, ready for roll-out nationally.

Valerie lives with her two Sky Terriers Dougal and Delphine, who are seen regularly across the UK in all our locations.

Own a company you can be passionate about

We are an Award Winning, very well established Dog Day Care business, a market leader in the UK with phenomenal results and we’re offering a chance to share this magical journey. We are franchising nationally please email info@caninecrecheuk.co.uk to find out more.

We don’t just woof about our own successes, we have some fur-bulous awards which do it for us! You can read all about is here.

We have no vacancies at present, though we are happy to hold your CV for consideration against future vacancies.

We are happy to take enquiries for Work Experience placements from Level Three Candidates, please contact us via email in the first instance and send your details to recruitment@suffolkcaninecreche.co.uk.

Sorry, we are unable to offer work experience to candidates whilst still at Secondary School as a work placement.